For those of you that have a Netflix account, you know that MitM has been on there for a while. Recently - like, a few days ago - seasons 1-5 got a major upgrade:

All episodes from those seasons have been remastered in widescreen HD. Which means, all 151 episodes of Malcolm are in HD - no partial 4x3 or "high resolution". It could lead up to Blu-Ray release - that remains to be seen (as well as if it's the same as how the series released globally). But more details...

Enjoy. (P.S. I haven't posted in a while. The signature at the end should tell you how long it's been.)

Staff member
Heya, it has been a while! Thanks for the update!

I am however rather surprised, remastering I presume takes a substantial cost, have they not just been upscaled like we have seen previously?

How can they crop out crew/mics/lighting without affecting the aspect ratio or losing more of the shot?

I've just signed up for a free trial to look.

According to Instant Watcher seasons 1-5 are in 'SuperHD' which is 1080p with a higher bit rate. So in theory very good quality. From what I can see, Netflix doesn't upscale, so it seems to be genuine 1080p.

However season 6 and 7 are actually still in SD. Which is obviously odd - however it does again suggest that they aren't upscaling 1-5, otherwise they would upscale 6-7 also.

If they have put the money in then it would make sense to try and make some money back on a DVD/Blu-ray US release.
Last edited: Oct 14, 2015 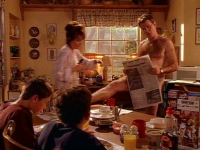 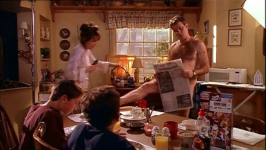 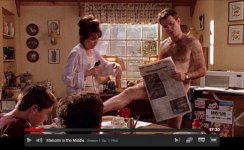 I did a quick check with the original DVD, Original Widescreen and Netflix.

You can clearly see the zoomed in netflix version, to cut out the lighting stands.

To do this JUST for netflix? I guess it's possible but strikes me as unlikely.

Unless this has already be done before? I haven't seen all the DVD releases myself.
Last edited: Oct 14, 2015
R

Not sure if anyone else has experienced this but I've watched A LOT of Malcolm on Netflix and I've noticed when I re-watch certain episodes there are audio glitches, like you can't hear someone talking, strange but hopefully it gets fixed. For example earlier today I watched Reese's Apartment and in the scene where Reese is watching TV you can't hear his suicidal neighbor talking like I was able to from past viewings of that episode. Like I mentioned this has happened a few times in other episodes but I guess it's not a big deal just a little annoying.
Last edited: Feb 13, 2016
You must log in or register to reply here.
Share:
Facebook Twitter Reddit Pinterest Tumblr WhatsApp Email Share Link
Top