Erik Per Sullivan, what is he up to now? Milford homey-gone-Hollywood Erik Per Sullivan of “Malcolm in the Middle” fame is cooking up thoughts of becoming a chef!

TV’s little Dewey Wilkerson, now 16 and a upperclassman at Phillips Exeter Academy, got a taste of the high-end restaurant biz when he spent a day shadowing Cambridge [, Massachusetts] chef Dante de Magistris of dante Restaurant for a school paper.

“The project for English (class) was based on, I think, a column in The New Yorker called ‘A Reporter At Large,’ Erik told the Track. “The point was to get a feel for a person’s character through their work. We needed to find someone who worked with their hands and analyze them.”

Erik said he thought he would find someone to profile for his 10-plus page report while in Panama on Christmas break, but didn’t have any luck.

“I tried to find someone in Panama who was educated and works with their hands, but I couldn’t find anyone,” he said. “I was really stressed out about the project so I had to cut my vacation short and come back here to find someone to profile.”

After returning to Milford, Erik hooked up with Dante through family friends, “Chronicle” host Mary Richardson and her hubby, Stan Levin.

“We thought they would know cool people,” said Erik whose father, Fred, helped him write up some questions for the chef since he owns a Mexican restaurant in Milford called The Alamo. “Dante was super nice and saved me on the project.”

The former child star said he was impressed by the chef’s hands-on approach to his restaurant.

“I figured he would be involved in all the high-level management and the direction of the restaurant. But then he threw on his chef’s jacket and went into the kitchen to cut up octopus.”

So, did you help out?

Sullivan is undecided about his career path, but said he may be interested in the Culinary Institute of America - the Harvard of cooking schools - or maybe even Harvard itself.

As for the acting, the one-time Tinseltownie said he receives a script “every now and then,” but doesn’t know “how much into it” he can get while trying to get through Exeter!

Would this caption identify this picture?

By the way, here's another picture that may be identified.

Any thoughts this may be the one? Wow. He's all grown up and away from the internet, huh. I thought something bad might have happened to him.

MITM_Fan said:
Wow. He's all grown up and away from the internet, huh. I thought something bad might have happened to him.
Click to expand...

Yes, definitely. I guess one of the the last pictures we've seen of him was visiting Justin on the Sons of Tucson set, he closed down his Twitter account after that, and wasn't even at the full cast reunion in 2012, where Justin just held a picture of him. I think he just chose to be as anonymous as he can now, concentrate on his studies and 'life after Malcolm', and we've got to respect him for that.

Other than that, it's just those crazy rumours posted on dubious places like YouTube and Reddit that he died in a car crash, was in rehab after drug abuse and all that sort of silly nonsense.

Here's an update on Erik.

As we say on our front page, Erik has definitely shunned the spotlight for nearly 10 years now, and appears to guard his privacy, which is what we should respect him for.

It's perfectly understandable if he, as a grown man, doesn't want to be constantly reminded of being 'little Dewey' and being called that way, when there's so much more to life than having portrayed a character as a little kid. 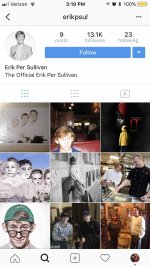 All of the pictures posted here are from 2010 or before, and only one of them, taken at the restaurant with the red benches, appears to be unique to this account. This looks like it was taken at his parents' Tex-Mex restaurant The Alamo, in Milford, Massachusetts, but again probably when he was a teenager. The photo montage of Dewey and his brothers at Mount Rushmore is an old one created by Tolpan of the former Erik's Empire website, which can also be found as Fan Art on our site:

The old photos of his father Fred Sullivan, who Erik resembled a lot when he was young, are from his father's Facebook account.

So in fact, the only verifiable, but indirect fairly recent connection we have is the snapshot shared by his father Fred on the Alamo's Facebook account, from November 27, 2015. This is captioned "Two fans of our restaurant, and our son", and shows two customers wearing identical T-shirts with a print of Erik as Dewey, and his father Fred between them: 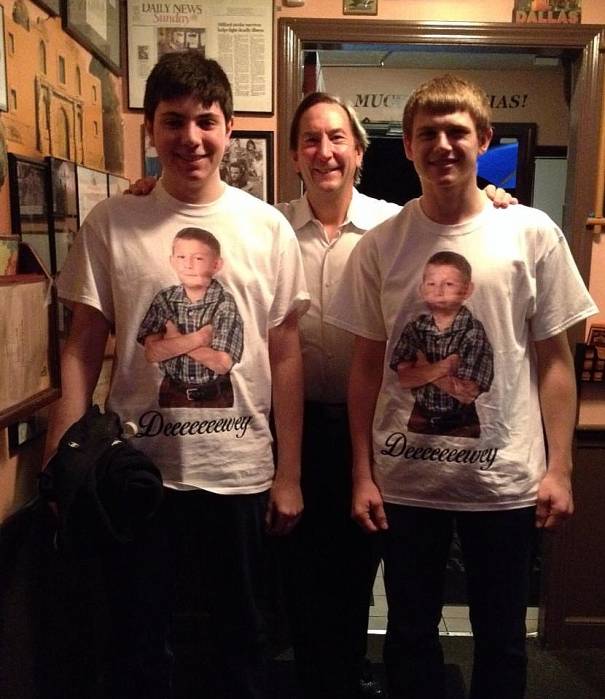 We also notice that Fred doesn't openly respond to inquiries about his son on Facebook - expect perhaps as private messages we can't see.

There was also a particularly nasty rumour on Reddit, posted on April 11, 2016, about a supposed child star who anonymously confessed having been sexually abused on a TV show by some people like executives and another actor, ripped off by his parents and sibling, and then turned to drugs. Although a number of details could imply this is about Erik (lots of fans under 35, TV dad became more famous in a later role, maybe Breaking Bad, they were brothers on the show, series ended 10 years ago), it's impossible that Erik wrote this, because I think we all know he is an only child.