It's in small text between the barcode and "Employee Identification" text.
L

How can anybody see that?

Wildcat said:
This is a bit silly though because it's been mentioned several times that Lois's parents (Victor and Ida) are from Russia.
Click to expand...

I don't think the nationality of Lois' parents is ever mentioned. Ida remembers "The Old Country" she grew up in, and the accents and names point to some fictitious Slavic country so as not to mention (and offend) a specific nation or people.

"Ida's Dance" has a number of national symbols that identify the homeland as Croatia, but I think viewers weren't supposed to notice that!

i could rather easily, with my 32'' monitor, but to bring my opinion into the conversation, nolastname seems unreal. Wilkerson seems like a name that fits the family (dont ask me why). It just seems right. Personally though i think it was the better idea to leave it out and hide the name.
M

I can see and even I tested with the ep I have.

What I see is "Francis NoLastName" this is so stupid can't believe they were so naive.

I would have sworn they zoomed into it in the episode, or it was a clearly readable font, when the finale first broadcasted. I now look at the episode, and it is the screenshot you guys show. It almost seem like the swapped out that clip when it went to syndication, with a different badge.

Or I been on these forms so long that I made myself think it was easy to read, lol.

Staff member
That still will be from the original broadcast. Its just you
B

well, I still think I read his name on TV... but i was watching the show on an HDTV set, would it been big enough to read when I was watching it?

it must be the difference between HDTV and non-HD TVs

and Batch, I know what it looked like, I have the episode (had entire series for over a year), but i do not have an HDTV resolution of the episode.

"We've decided not to say anything about his age on the show,'' Boomer said. 'It's like the city they live in. We're just saying he's attending middle school, not the actual grade level. We don't want to be locked into something. Kids are so protean with what they say, anyway. Sometimes they act like 9-year-olds and sometimes like 30-year-olds.''
K

I've never been keen of the lack of information given about the family, in the final episode there are 2 references to the last name not having been referenced to so I think it was only then that Mr. Boomer decided he would not give a last name. I have always for all intends and purposes however, used Wilkerson as the family name

I watch MitM on 5*, and the EPG on my TV regularly refers to the family as "The Wilkersons"!

At Marlin Academy the lack of a surname seems wierd, since all other Cadets use surnames to address each other, but call Francis: "Francis". In the episode with the "Brothers of the Apocalypse", they call Ken Finley "Finley" in their chant, but Francis is called "Francis". His name tag in later episodes syas Francis as opposed to his surname as well. It just seems wierd that everyone treats Francis differently.
Last edited: Jul 28, 2011
E

Not everyone has a name that rolls off your tongue perfectly. Maybe it was even deliberate.
I

FunkySkunky420 said:
I have a good question if nobody here can answer it already. What is the familys last name ive been curious of that for a long time and i always try and see if they bring it up in any epesode.
Click to expand...

Wilkerson... It's the name of the forum!
J

it is very confusing:cursing::cursing:
P

Quote;
I've never really thought about this before Reese, Dewey, Hal, Jamie and Lois all sound okay with Wilkerson. Malcolm Wilkerson though....? Try saying that 10 times fast.
whenever I say it 10 times fast, it comes out as Malcol Wilkersol.
PS, sorry the top of the page looks so weird, I can't do the quote thing with the box and all

Hmm....spokeo.com suggests that a former homeowner of the Malcolm in the Middle house was a person by the name of F**** Wilkerson. 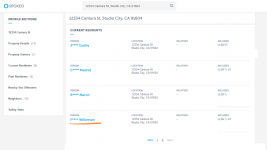 We know the original house at 12334 Cantura St, Studio City, as we know and love it, was destroyed around 2011, and replaced with a completely new and vastly different structure, apparently made of whitewashed concrete in the 'functionalist modernist' style.

It looks like a family of Armenian descent lives there now, 9 people in all, which is quite a number, all with different surnames, which is a bit weird to me. Is this information reliable, or would some jokester be able to enter a fake name like F**** Wilkerson in Spokeo, just for a laugh? On the other hand, the surname would indeed have been a credible source of inspiration, as a kind of private joke on the then owner's name.

The list of past residents looks very intriguing too. If regular guest actor as Busey boy Chad, Cameron Monaghan's surname had been 'Monahan' without the 'g', he could have been a resident as well!

And who directed Chris Masterson in The Art of Travel? Right, one T**** (Thomas) Whelan!

Then there is a resident 'R**** Wallace', who apparently now lives at Allegheny Drive in Danville. Dewey's chocolate bars he was trying to sell in the episode "Experiment" (5x19) used the fake brand name ... Allegheny!

Oh, and by the way, which is totally irrelevant (irreverent?) but fun, the surname 'Neukum' sounds like "Nuke 'm" in English, but definitely like "F*ck 'm" in Dutch!

You see how easy it is to suspect some sort of conspiracy theory going on here? And I'm not even deliberately talking BS here, there is a factual basis.

Fortunately, there are 'no nearby sex offenders', so it's perfectly safe to walk the dog.

You see how easy it is to suspect some sort of conspiracy theory going on here?
Click to expand...

If true at all, this surely sounds weird. I only hope this doesn't refer to the MITM house? It doesn't look like it though, judging by the description.

I also wonder what the purpose of this site is. Just crazy rumours anyone can make up, or are these quizzes where solutions are provided or confirmed with sources?

I see they also reposted this Reddit nonsense about supposedly a child actor on MITM who was sexually abused on and off the set and became a drug addict. Never any reliable source or reference, so best ignore it.