Couple of months ago, some of the creative members wrote some cool ep. ideas and scripts. I thought it would be cool & possibly a bit easier if people started suggesting cold opens for mitm (deceased).

Heres my attempt, its crappy and rushed and kind of a rip off from red dress and some episode in season two.

EXT. SHOT OF WILKERSON HOME
we hear comotion inside there is talking.
through the blinds we see one person throwing an object and the other with a bat in a baseball type came.
We hear something smashing.

The shot remains outside, through the blinds we see those inside running aroung. The camera then appears to be walking into the house gradually.
We hear, 'Okay one more go' (slightly muffled)
The camera finally enters the boys bedroom, just as we see Hal hit a ball thrown by Lois at Malcolm's microscope, Hal shouts 'Home run'

Immediately he stops and looks at camera, camera twirls to reveal Dewey. Lois asks how much. Dewey pauses for thought
D: A bed to myself for 4 nights
L: 2
D: 3
L: 2 nights with an extra pillow
D: If I can destroy 3 objects
L: Done
Hal hands Dewey the bat, and they take their places, while Dewey announces what he is aiming for, then cut to titles.

ALTERNATIVELY
An option more for the fans with a knowlegdge of the cold opener in which Malcolm and Reese accidently break various objects in the room while playing with a bat.

Rather than including Dewey, the beginning runs the same, but once we hear the first object breaking, the camera cuts into the boys room, Lois is batting, we see a smashed microscope
L: $45, that makes up for the ceramic vase, what next
H: You have a choice, either (PRODUCING BROKEN OBJECTS) the toaster (EVIDENTLY EXPLOADED) or tumble drier
L: I'll go for the drier
Camera switches to Lois point of view, as she looks around the room to find something of equal value, finally, through the door she sees the TV
H: No, no! think about what you're doing
L: Pitch it!!
cut to titles
R

It's a nice idea, but why would Lois and Hal break stuff they bought?
D

it's intended as revenge, we often see Lois resort ot extremes when she's been annoyed and Hal just likes to act like a child

Not bad. It really seemed MITM-like. I like it.

Not bad! Mind you, that's more of the boy's behavoir, but it's funny to see Lois act that way!
D

Seeing as no one else seems to be posting any, I thought I'd have another go at a slightly simpler cold open:

Lois and Hal are in the living room listening to some crap oldie person music, Hal is gently messaging Lois (as per usual, he is obviously trying to seduce her)
Suddenly in background a fire engine goes past with sirens.
Hal stops, Lois looks exhasperated, begins to get up 'I'll go get the car keys'

As she moves, two police cars go past the window
Hal: I'll call the lawyer

Yeah, that's a good one

LOL! Deweyrules! your cold opener ideas are really good, I wish they could be made as I can picture then so well in my head.
A

Yeah it's nice.. I can picture the scene too..

Look at that one... The original Cold Open for "Reese Joins the Army": 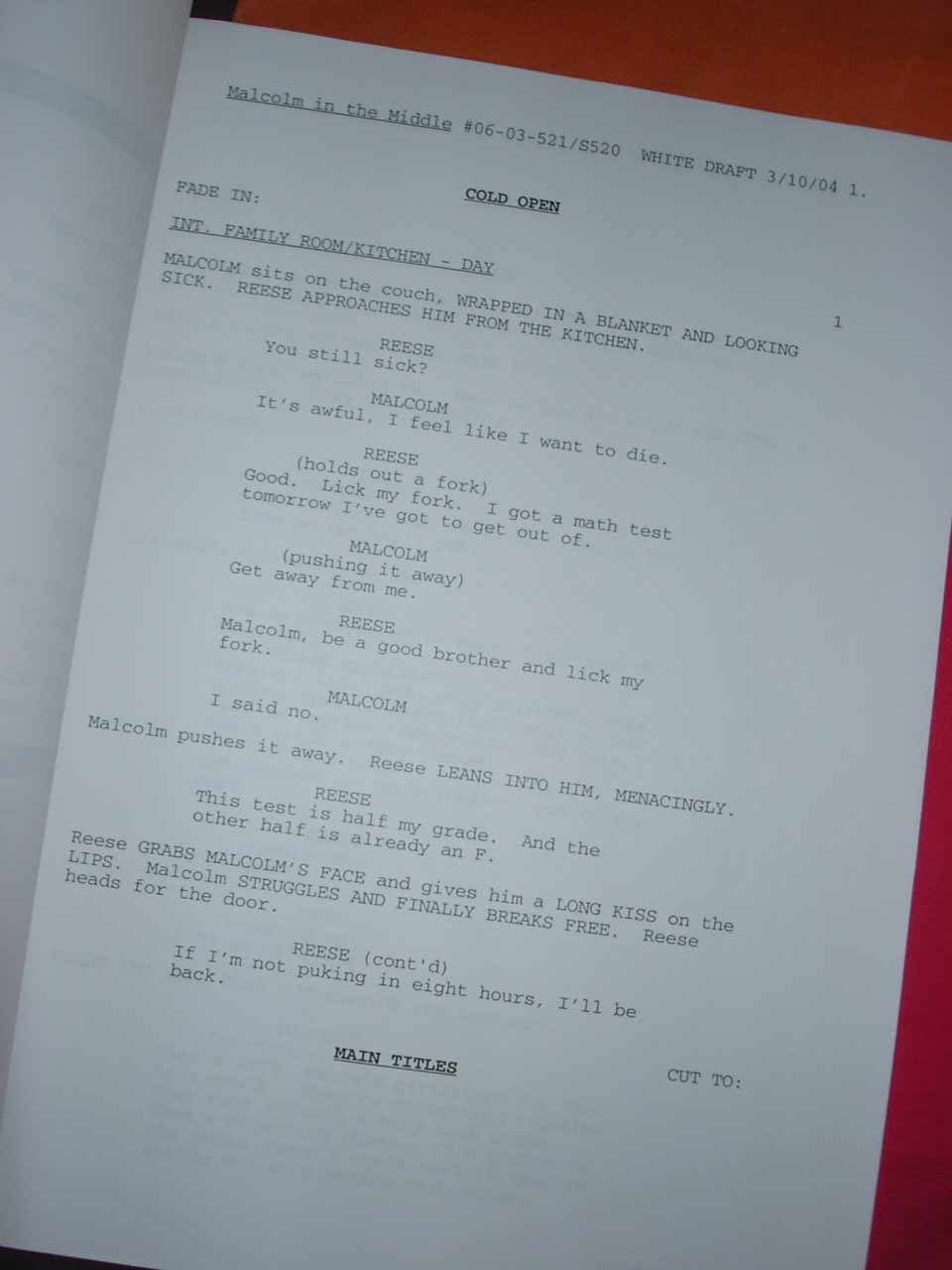 LOL that's great. Why did they cut it? Justin and Frankie not wanna kiss? How do you get a hold of these great things?
A


yardgames said:
LOL that's great. Why did they cut it? Justin and Frankie not wanna kiss? How do you get a hold of these great things?
Click to expand...


I was totally disapointed when I discovered they've replaced that one. It was so great.. But, like you, I guess Frankie and Justin didn't want to kiss... That's a pity considering the one they chose to replace it is not really good...

Actually I've got two original scripts: "Reese Joins the Army" and "Stilts". By the way it's interesting to see how many lines are deleted...

I think I almost barfed....:Sick:
Im damn glad that wasn't in the episode.
D

That's sooo funny, I think you need to have watched enough MITM in your mind to make reading them work- it enables you to picture them so vividly.

I saw a copy of the pilot script signed by Frankie on e-bay the other day, think it was about £15. One of the main aspects of the DVD's (if they ever come out-lets not start that again though ) I am must looking forward to is the deleted scenes- imagine how much new MITM stuff there will be!!!
Y

I don't even need the new stuff on the DVDs--I just want any stuff at all!!!
D

Question. If they do eventually release the DVDs, then what about the commentary, deleted scenes, etc.? They're definitely not coming back to do those. It would be really stressful to compile the special features. Maybe they would just leave it all out.
You must log in or register to reply here.
Share:
Facebook Twitter Reddit Pinterest Tumblr WhatsApp Email Share Link
Top