"Cynthia's back": What book is Hal reading?

season 3, episode 14 "Cynthia's back": About 2:30 mins into the episode Hal is seen reading a book while Dewey tries to entice him to play with his kite.

Can someone decipher the title of the book?

It seems to be some sort of a pirate-novel by an author called "Ferrington", the title seems to have the words "lust" and waves" in it - unfortunately the video quality of my recording is rather poor...

A purely fictional novel I suppose?

Smart but very tough question, I found out the hard way!

I just watched the episode again, and I'm sure you must have already researched the matter thouroughly, so there's little for me to add, I'm afraid.

It looks like the author is indeed "Ferrington", and the title looks a bit like "A Pirate of the Lost Waves", but neither the author nor a title like that can be found, so I guess it must have been one of these fake books from the prop department.

Could it have something to do with copyright claims? Or the fear of a character or the director/producers being too closely identified with a real author or theme?

I've tried again to extract some frames and sharpen them but unfortunately I can't make the text fully legible.

Code:
I cannot read the first word(s), however it seems to start with a capital "A" and to me it appears to be one word, so I am not sure about the first part of your guess, but it is definitely "lost" and not "lust" as I had assumed earlier.

Richiepiep said:
Could it have something to do with copyright claims? Or the fear of a character or the director/producers being too closely identified with a real author or theme?
Click to expand...

The thing is that this plays no role whatsoever for the episode. Hal could be reading a magazine or some book from the public domain and it would not change a thing.

So why did they go the lengths of making up a cover for a pirate-novel that hardly anybody would notice and that has no real role to play - rather then simply letting Hal read some generic newspaper?

It must be some in-joke of the production team, not intended for the audience.

Well, I guess they just have tons of stuff, like novels and fake novels, at the ready in the prop department, and after all, it could be just a photocopy you can stick on an existing book if you want to.

I'm thinking of the fake books in Moonrise Kingdom, for instance, which definitely must have been made for the occasion, and I remember that in movies in the Thirties (1930s), when a movie was advertised in a newspaper, or on a marquee, they had a habit of generically calling it Another Dawn, until they were lost for a suitable title of a movie they were making, so they used the title for real!

So it could be an in-joke, but I don't know what a pirate theme would have to do with Hal. Perhaps it's his dreams of being a 'wild', carefree young Turk again, like riding his motorcycle and running his own CB radio station before he married Lois?

Meanwhile, I leave you to ponder the internal or external significance of these real books in some screenshots I had lying around, from TV shows 7th Heaven and The Adventures of Pete and Pete. 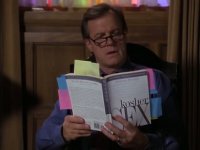 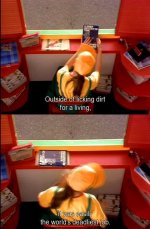