Bryan Cranston and Aaron Paul go into business together and this time it's legal…barely. Find out what happens when Julia Louis-Dreyfus becomes a client, trying to offload television’s most coveted item.


It has quite a few nods to Breaking Bad. (Pay attention to the background… You might spot a few familiar details.)

Staff member
I enjoyed this very much, the Weeds mistake was great also. This could actually be a show. This should be a show. WHY IS THIS NOT A SHOW!
J

Brilliant skit! Though Bryan has a history of doing crazy things and send-ups, I didn't expect this!

I guess this is a parody of this pawn shop reality show, about a father and a son and their bartering tactics. Was it on Discovery Channel? Hardcore Pawn?

Loved the little in-jokes, as when Aaron Paul says "Supporting (actor) is a huge honor", while Bryan isn't too sure....
And when Julia says "It's cable money", so it doesn't pay too well, Bryan says "Tell me about it" - AMC is a cable channel.

Well, I noticed the "Los Pollos Hermanos" sticker, but I guess there must be more?

Tell me about it!

P.S. And Bryan and Julia do have a history together on Seinfeld. Which would be continued on Emmy night!
Last edited: Aug 29, 2014

@TJ: that was definitely the most heard comment. And I agree.

I believe there were six Breaking Bad things, I spotted 3 on my own: the pink teddy can be seen very briefly at the beginning, the Jesús Malverde statue and los pollos card/sticker. Others were a Los Pollos cap, a gasmask (in the shop, I don’t mean at the end) and a small Vamonos Pest sign can be seen on the wall when Julia enters the shop for the second time. There could be more.

Ah, I see the pink teddy bear now! Which, incidentally and eerily, can be bought from Mezco Toys in its sorry pre-burnt and pre-mutilated state:

And I had totally missed the Jésus Malverde statue on Hank's desk, the 'narco saint' of Mexican drug dealers. 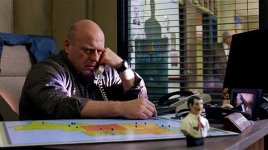 It's amazing how many details about the burnt teddy bear are listed on the Mezco Toyz site, by the way.

I don't think I caught them all! I really need to watch BB again some time! So many cross-references, in-jokes, hidden clues etc.

The Pink Teddy Bear fell into Walter White’s swimming pool during the Wayfarer 515 aircraft explosion. The aircraft was a 747 and, coincidentally, $747,000.00 was the amount Walter initially set out to raise to provide for his family after his anticipated death from cancer. During the crash the Pink Teddy Bear lost an eye, which Walter kept.

As eagle-eyed Breaking Bad fans also know, we first met the Pink Teddy Bear in the “Fallacies” music video for Jesse’s band Twaught Hammer. Then, when Walt walks naked into a Hi-Lo Mart, the bear is seen in the background for sale in a display of plush toys.

The Pink Teddy Bear shows up again falling from the sky in the mural painted on Jane’s wall behind her bed. And, most notable, the damage to the Pink Teddy Bear (half burned face, missing eye) foreshadows the “face-off” with Gus Fring later in the series.
Click to expand...