[As you can see, I'm adding archived vintage TV Guide Online articles to our Gallery. So surfing their current Guide, this article really hit home. It's terrible that someone can get so desperate about his ailing condition to inflict this on himself - other sites report that he had already had one leg amputated. There must be so many, far more humane and supportive, alternatives.]

The 61-year-old was in his Cincinnati apartment Monday morning when he shot himself in the head and then called for help. According to audio of the 911 tape posted on the gossip site, he told the operator, "I've shot myself in the head and I need help."

The gunshot to the temple was not an accident. Von Bargen, who is a diabetic, recently learned some bad news. "I was supposed to go to the hospital and I didn't want to. So I shot myself... They were supposed to amputate at least a few toes."

Von Bargen was transported to a nearby hospital.

The veteran actor also recurred as Commandant Edwin Spangler on Malcolm in the Middle. On the big screen, he's appeared in O Brother, Where Art Thou?, The Faculty and Super Troopers.
Last edited: Mar 14, 2013

It's been a long time, I know, but a while ago, I contacted some people who represented Von Bargen when he was still active in several fields within the industry and I have some good news.

It seems that Mr. Von Bargen has moved into a new residence where he is better able to address his ongoing health needs and that he has chosen, for now, to "retire" from the business until such time or if ever he feels he is interested in returning.

He is a diabetic and at the time of his injury last year, that diabetes was not under control and indeed, had led to some complications that would be distressing to anybody. Now, he is living in circumstances of relative peace and quiet where he can concentrate completely on his health and wellbeing. He is supported by friends and family at this time and will be out of the public eye for such time as he decides his necessary to regain his health and fitness.

Since he had such a long and wonderful career, any fans who are worried about how he will care for himself should know that the Motion Picture Health Fund and the various Unions he has been and likely continues to be a member of have that covered. Even if you aren't actively working, if you have worked X number of years within SAG or WGA or AFTRA etc. and so on, you have access to decent healthcare. It's why you pay dues into those unions in the first place plus part of your paycheck goes towards funding programs for retirees, the chronically ill, the disables and so forth. There are other in-industry programs as well that would be available to him for both physical health and mental health.

Keep the above in mind if you know of an actor in distress who has worked in the field for at least 7 or 8 years - direct them towards the Actor's Fund who can tell them about all the other help available.

The consensus of the people I spoke to was that Mr. Von Bargen is doing much better and finally taking the time off that he needs to address those health issues that so troubled him a year ago. He is choosing to do so out of the public eye and we should respect that. I am not going to recommend that fans send letters or cards because the time for that has passed and it might be kindest to simply let him get on with the business of healing so that he can come back to us as a performer at some future date. Most of those who know him believe that when he is physically well, rested a bit and had some time to spend with his friends and family, he will return to performing again.

Whether he does or doesn't return to performing doesn't matter to most of the well-wishers here; they just want to know if he's OK and he is. He really is OK and doing what he needs to do just not in a TMZ, Dr. Phil, Dr. Drew, tell it to Oprah kinda way. That's not how he rolls.

Let us now talk more about his roles we enjoyed and let the issue of his unfortunate public tragedy just do what it should do... fade away the way these things should. However, do let's all hold him in our hearts however we chose to, whether thru prayer, thoughts, meditation or marathon viewings of The Postman!
J

Thanks so much for the update, I have tried to find out how he is doing through internet searches, but there just wasn't much information out there. So glad he is ok. I have indeed prayed for him. : )

Daniel von Bargen, a prolific character actor best known for his role as George’s lazy boss Mr. Kruger on “Seinfeld,” as Commandant Edwin Spangler, the military veteran who oversees the cadets at Marlin Academy, on TV’s “Malcolm in the Middle,” and for his role in a two-part episode of “The West Wing” in which he played Air Force General Ken Shannon, died March 1 in Montgomery, Ohio, after a long illness. He was 64 and had been dealing with health issues for the last five years. Daniel von Bargen as Spangler in the MITM 'Water Park' episode​
Von Bargen was known for roles as irate or defiant cops, district attorneys, judges, and other authority figures. But he also spent a good deal of his time onstage.

The actor had most recently appeared in Thomas Edward Seymour’s 2009 feature “London Betty,” in which he starred.

But mostly von Bargen was relegated to small but frequently memorable supporting roles.

In HBO’s 1995 biopic “Truman,” starring Gary Sinise, von Bargen had a good opportunity to showcase his skills in the role of Gen. Douglas MacArthur. He also appeared in the HBO telepic “Citizen Cohn,” in which he played J. Edgar Hoover’s protege Clyde Tolson.

Born in Cincinnati, von Bargen majored in drama at Purdue University. He worked for years with the Trinity Repertory Theatre in Providence, Rhode Island. He made his Broadway debut in Larry Gelbart’s “Mastergate” in 1989 — playing a military figure, Major Manley Battle — and subsequently appeared Off Broadway in productions of shows including “Beggars in the House of Plenty,” “Macbeth,” “The Cherry Orchard,” “Hurlyburly” and “Uncle Vanya.”

Von Bargen made his screen debut in a 1974 segment of PBS’ “Great Performances” called “Feasting With Panthers,” which followed Oscar Wilde’s five years in prison. He worked occasionally on television until about 1990, after which he made steady appearances on the smallscreen for decades, including in many TV movies.

Someone who also badly suffers from diabetes wrote these comments on Von Bargen's likely condition and state of mind on the Internet Movie Database Forum:

When he had the [earlier, ed.] suicide attempt, he had already lost one leg and clearly was upset at losing two toes on the other foot. His attempt was on the same day he was to go in and have the toes removed. He said he was depressed, had no life, no kids. He was pretty much alone. I suspect it was not just the toes that led him to that attempt, but the thought of what was yet to come and being convinced that he'd lose that leg too. Odds are on his removed leg he lost toes first. No doubt in my mind that he felt hopeless.

I am a diabetic myself. Have not managed it well - could be better, could be worse - and things are starting to go south for me, including feet/toe issues. I am about the same age as him, and while I have yet to lost any parts of my body, I know it is only a matter of time. (...)

I could be wrong, but I doubt that he killed himself Sunday. It's roughly three years since his attempt in 2012 when he was about to lose 2 toes. I am guessing that he just deteriorated the last three years and truly passed due to complications from diabetes (which could be any number of issues and/or a combination of them).

May he rest in peace. I enjoyed him in many films and TV shows and always was happy when I spotted him in one I had not noticed during previous viewings, like The Silence Of The Lambs.
Click to expand...

On a lighter note, someone who attended Purdue University with him, posted this photo of the cast of the Experimental Theater musical Leave It To Jane partying in May 1969, when Daniel was just 18. He is third from the left. I decided to clean the image up a bit - click to enlarge: 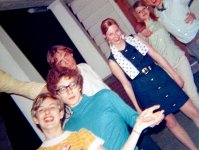